Claas Reiss presents ‘waxed plastic farmhouse’ by Berlin, Germany based artist Michel Gomm in his first exhibition in the UK, and a text by Michael Broschmann.

‘Where moments and memories are captured in pictures, cropped, selected and shared, reproduced and mediated through touch-sensitive hard plastic or Retina-pixelated glass in AMOLED or LCD technology, they became snippets, GIFs, gimmicks, memes, illustrations of themselves, or even something else. Here they create their own aesthetics and sometimes unpredictable dynamics, merge and interact with the realm they are witnessed from. Since boundaries between the two worlds seem hardly distinguishable, there often remains a demand for authenticity. In the same way, the question of the best image seems to have become an integral part of the consumer behaviour of today’s affect economy: Which media materiality reflects an ”original“ best? Which on-screen representation is the most genuine? Imagine virtual simulacrum merging fully into reality, so the variability of the illusory would become accepted: You could recall all your first times of your youth, stop time, rewind and dim the light or adjust the colour value. The picturesque and kitsch, exaggerated ideals, seem to become nostalgic phenomena or trash if they no longer stand out from an actual reality that is not.

Here, Michel Gomm takes these wildly mixed simulacra of the media world as a viewer of Generation Z. He arranges, copies them and amplifies every nuance of fine trash, tuned according to his own intuitive rules of composition and narrative-forming chains of association. These images, as if taken from a virtual absurdity, are brought back into almost nostalgic material accessibility. It only becomes magical as it stands out from any magic of virtual space – as if taken from a more primal simulation – like some sticker collections of later Millennials. He approaches idiosyncratically and without prejudice a fragmented world, otherwise constructed of fixed orders and rules of etiquette, as if from cooled and confused remnants of a waning euphoria. Like a coming-of-age teenager, he rejects these filters and does not search for their answers. Instead, he further decomposes and recombines: acrylic paint, marker, a bicycle reflector, a smoke detector, almost indefinable pieces of wood or metal stretched with wire or glue. All seem equally embedded here in found and modified, small to medium-sized frames – like old discarded amateur landscape paintings from flea markets – hard to digest, charged, but coherent, rounded –  thrown together, but still finished objects. This attitude may be also recognized in the collection of stickers on „Bauernhof“ – at first sight appearing so light-heartedly distributed all over – as if to invite one to add new ones – but on second sight seem to reject intervention: framed in coated wood and smileys directly addressing the spectator, they rectify the hierarchy and take back the initial invitation. Similarly in „inliner“ a mass of catchy and provocative images disappear in its background, camouflaging with its applied objects and its sometimes flatly, sometimes plastically painted fragments. All elements hide within the frame, which is actually supposed to stage it. Here the garishly colourful plastic coatings of the figurative acrylic paint also include the impasto painted strokes – which would be just extra elements that could as easily be layered over again. These traces do not seem in harmony with their content. Every colour and element appears to be taken from icons. Its reading forces itself upon us, but blurred, disturbed in its own dynamics of surface and arrangement. The apparent weight of the content contrasts with the playful lightness of the form. Small imperfections finely tuned into a perfect self-contained world. „waxed plastic farmhouse“ mimics Playmobil-country-sets of a farm with a barn, and an absurd, but small variety of animals. He allows these sets to be re-evaluated and offers us kaleidoscopic glasses newly assembled from old lenses.

These images of mixed simulations become characters. As trashy, offensive or inappropriate as they may seem, they remain harmless in their arrangement, supported by the others. As if snatched from another world, they move on a new terrain of the exhibition space, only carrying the ballast of their former function, but no longer knowing it. Awkwardly and shyly, they themselves become plastic spectators, looking back at the visitor, waiting for them to interact, and suggesting where they might come from. Yet they themselves do not seem to know – they cannot tell. As in childhood or adolescence, just treading new ground, these figurings cautiously ask the visitor what they may mean, and invite them to play. Like hairy pigeons waxing, and attending a mosquito opera together with a pink dressed flamingo stuck in a plastic country farm.’

Michel Gomm (born 1997 in Marl, Germany) graduated in 2020 from Kunstakademie Düsseldorf in Germany as Meisterschüler of Tomma Abts and was a scholar of Studienstiftung des deutschen Volkes, Germany’s largest and oldest scholarship foundation. Selected group exhibitions include ‘Vertrauen’ at Kunst im Tunnel (KiT) in Düsseldorf in 2017 and ‘Awakening before dawn’ at Kunst im Hafen WERFT 77 in Düsseldorf in 2021. ‘waxed plastic farmhouse’ at Claas Reiss is Gomm’s first solo exhibition and first exhibition outside of his native Germany. Michel Gomm lives and works in Berlin, Germany. 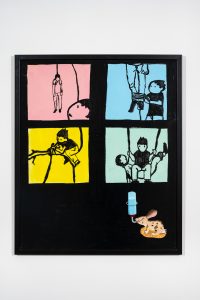 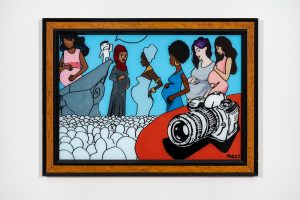 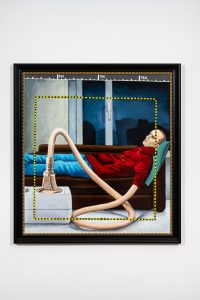 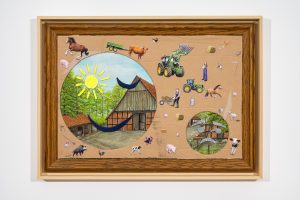 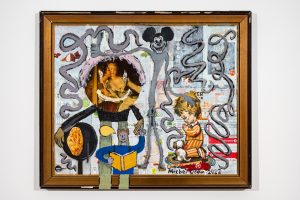 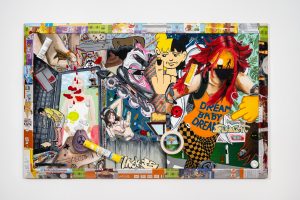 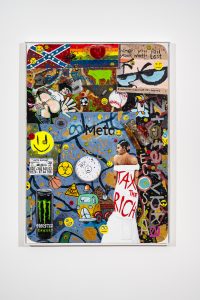 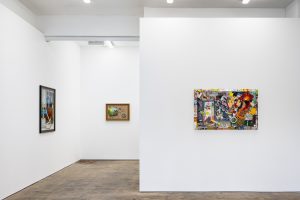 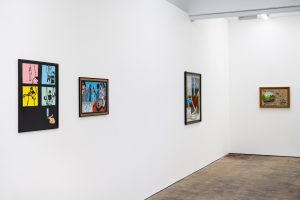 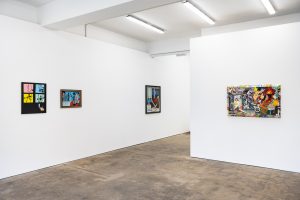 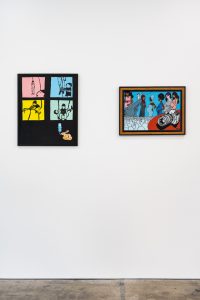 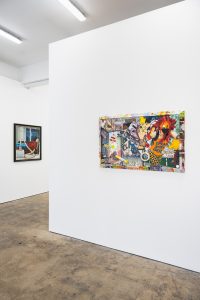 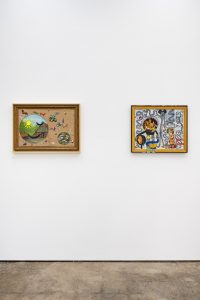 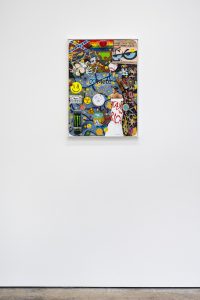 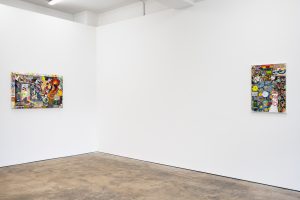 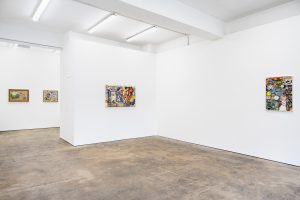 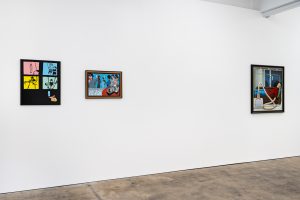 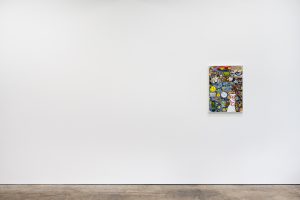 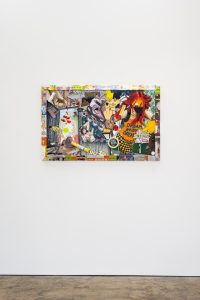 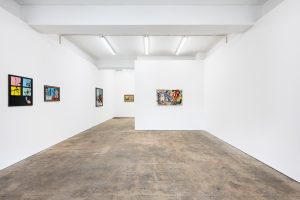 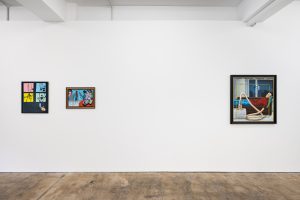